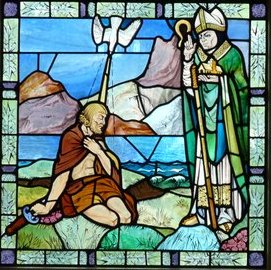 The facts we know about St Ninian are few, and can be briefly stated; even the proper form of his name is uncertain - he is also called Ninias, Ninus, Dinan, Ringan or Ringen. We do not know when he was born, but he died around 432; he was a Bishop and confessor, and according to Bede "had been regularly instructed at Rome in the faith and mysteries of the truth".

He is said to have been buried at Whithorn, in Wigtownshire, in the church he built himself, which was known as the Candida Casa or White House, apparently because it was built of stone, a practice then unusual in that part of the world.

The success of his mission to the Southern Picts is uncertain: although the monastery he founded at Whithorn became famous as a school of monasticism within a century of his death, later missionaries such as Patrick, Columba and Kentigern suggest the Picts afterwards abandoned the faith Ninian taught them. Nevertheless, he is rightly revered as the first Apostle of Christianity in Scotland.